This was the production that got me hooked on theatre. 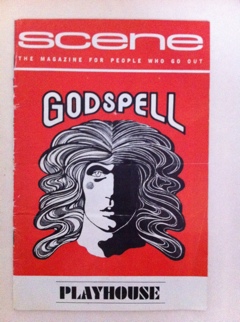 I was in the seventh grade and had a school assignment to see a play and write a review of it. I had most of the term to do it, but left it rather late. I got out the theatre listings and started calling various theatres around Toronto, to find tickets to something—anything. But I had little luck, because a) tickets were too expensive, or  b) shows were sold out, or c) it was the ’70s, and there were a disproportionate number of shows that involved nudity and therefore off limits to an adolescent. One ticket agent reamed me out over the phone because she thought I was deliberately trying to get into a nude show, when, really, I was just ignorant.

Finally a nicer ticket agent from one of those verboten nude shows suggested I try the Bayview Playhouse Theatre. She said there was a show there that I’d probably like that was ok for under-14s. I knew nothing about the show other than it was a musical and at a theatre I could easily take the bus to, and I lucked out and found last-minute matinee tickets. I dragged along a friend who had a different English teacher and didn’t have to write an assignment about it.

I didn’t just like Godspell—I loved it. Ridiculously, giddily loved it. I’ve been a sucker for musicals ever since. I ended up going back and seeing it three times before the run ended, even dragging my whole family along for one performance. Even as a 12-year-old I was aware of something extraordinary going on. And no wonder—check out the cast:

Gilda Radner, Jayne Eastwood, Eugene Levy, Andrea Martin, Martin Short, etc.,…all before they were famous. And the musical conductor was Paul Shaffer, of David Letterman fame. People still talk about this production, for good reason. The combined talent nearly blew the roof off the place.

A while later, the same friend and I saw another musical at the Bayview Playhouse that also featured Martin Short. We ran into him on the sidewalk afterward and turned into blubbering idiots. He was friendly and gracious, and had all the time in the world to talk to a couple of star-struck kids. At least at the time I had my youth as an excuse. If I ran into him today, I’d still be a blubbering idiot. Hopefully he’ll forgive me if I told him I saw him in Godspell…squee!

As you can see, I still have the program. I wish I still had the assignment that I wrote about the show. I know I gushed about the production, but it would be interesting to see a 12-year-old’s take on a seminal moment in Canadian theatre history.